The would-be president is proud of his heritage. And many in Ireland see in him a chance for change on issues like Brexit

It was a telling line that almost got drowned out in the acrimony of the first US presidential debate. Donald Trump, Joe Biden said, belonged to a caste of aloof plutocrats. âThey look down their nose on people like Irish Catholics and like me.â

It was an appeal to the middle-class and blue-collar voters who will decide next monthâs election â and a statement of the value Biden places on his Irish heritage.

With polls giving the Democrat a wide lead there has been much attention on how his age (77), personal views and political alliances might shape his administration and draw a line under the Trump era.

Often overlooked is a side to Biden hiding in plain sight: a sense of Irishness that colours his character and views on foreign policy issues of vital interest to the UK. Hello, Brexit.The former vice-president is five-eighths Irish, a lineage that leads to the Blewitts of County Mayo in the west of Ireland and to the Finnegans of County Louth on the Cooley peninsula overlooking the Irish Sea.

His ancestors fled hunger and poverty in the 1850s, a folk memory steeped in Biden when he grew up in Scranton, Pennsylvania, which he has described as called an overwhelmingly Irish parish. Catholic, too, and Biden is still observant.

âHe always said his mother raised him with such Irish values,â said Laurita Blewitt, 37, a fourth cousin who helped gather the clan for a lunch when Biden visited Mayo in 2016. âItâs not just something he created for the election, itâs very much part of him.â

JFK began the tradition of US presidents exploring family roots on visits to Ireland, a precedent followed by Ronald Reagan, Bill Clinton and even Barack Obama, who visited Moneygall in County Offaly in 2011 after a genealogist discovered his great-great-great grandfather came from the village. The president joked about how the OâBamas lost an apostrophe.

Biden has visited Ireland multiple times, often privately, without fanfare, and charmed his hosts. They are rooting for him to win on 3 November.

Artists in Ballina, in Mayo, have painted a mural of the candidate near a hospice where he turned the sod. Joe Blewitt, a plumber, has endorsed his third cousin with a sign on his van: âJoe Biden for the White House, Joe Blewitt for your house.â

A picture of the van spread on social media, prompting abuse from some Trump supporters. âOne guy started roaring down the phone, but my number has gone worldwide, what do you expect?â said Blewitt. âLocals love it. Times are hard, you need something for a bit of craic.â Blewitt has met Biden several times. âHeâs a really nice fellow, big into his family. Heâs not daft.â

Supporters launched an Irish for Biden campaign in a pub in Carlingford, home of the Finnegan wing of the Biden ancestry. The campaign is urging Irish people to âcall a cousin, phone a friend, ring a relativeâ to mobilise Irish American voters. âHe hasnât got the gig yet, weâve got to be very careful,â said Paul Allen, a public relations man heading the initiative. âItâs a great opportunity to get another Irishman in the White House.â

Biden opposed Brexit and has warned Downing Street that if it undermines the Good Friday agreement, it can kiss goodbye to a trade deal with the US â a grim scenario for Boris Johnson.

This is politics, not sentiment. Biden considers Northern Irelandâs peace deal a success of US foreign policy and globalism, which he has long espoused. He sees the EU as a partner for the US. Powerful congressional Democrats such as Nancy Pelosi have bashed Britainâs Brexit policy for similar reasons.

âThe actions of the Boris Johnson government, in trying to escape its obligations under the Good Friday agreement … have awakened and energised many Irish Americans who had previously thought Northern Ireland was on the path to lasting peace,â said Daniel OâConnell, head of the non-partisan Ancient Order of Hibernians in America.

Dublin envisages close cooperation should there be a Biden White House. âHeâs someone who gets Ireland and weâd look forward to working with him,â said Neale Richmond, a foreign affairs spokesperson for Fine Gael, one of Irelandâs ruling parties. Ministers such as Leo Varadkar and Simon Coveney have personal ties with Biden, said Richmond. âIf heâs elected they will have the ear of the next president.â

Bidenâs avowal of his roots â he often cites Seamus Heaney and WB Yeats in speeches â comes with a big caveat: it wonât help him win.

More than 33 million Americans claim Irish ancestry, but they are as divided as the rest of the nation and donât vote based on heritage. Once a Democratic bloc, many drifted to the Republicans under Reagan and many voted for Trump in 2016.

Trump claims affinity with Irish Americans â âI think I know most of them, because theyâre my friendsâ â and has appointed many to senior posts. This wonât help him win either.

News – âBiden gets Irelandâ: why Joe in the Oval Office would thrill Joe in Mayo 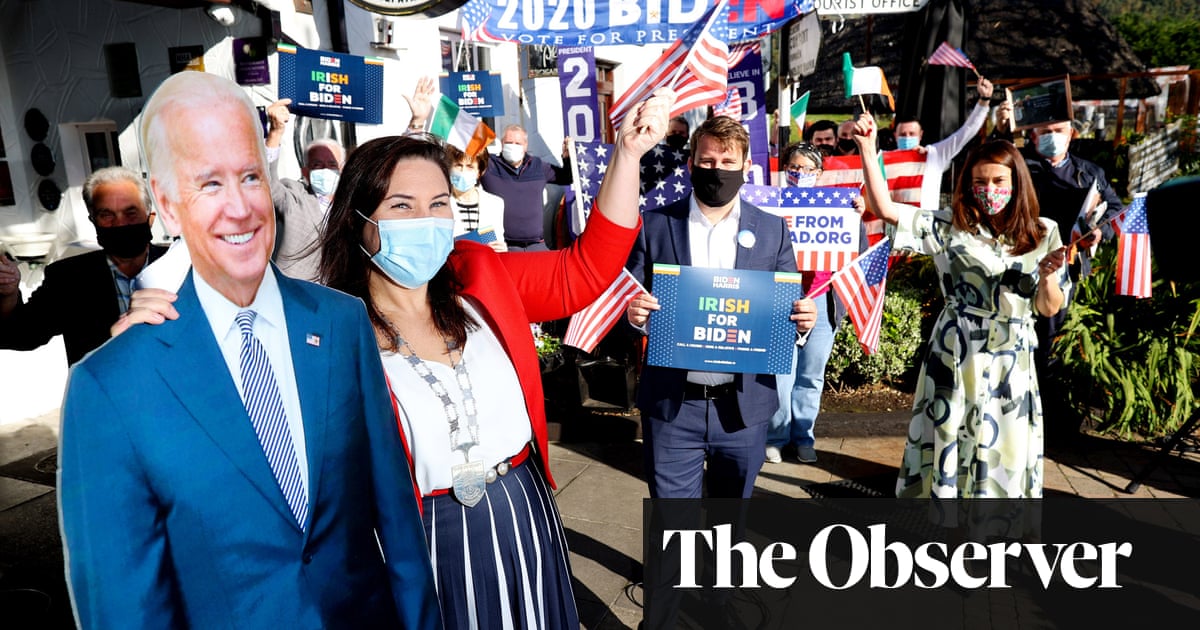