Cabinet Office Minister Michael Gove savaged the Greater Manchester mayor, warning his ‘posturing’ would cost lives in a city that has one of the highest Covid-19 rates in the country.

A group of women in Manchester sing as the 10pm curfew approached yesterday evening. The city has one of the highest Covid-19 rates in the country

He told Sky News: ‘I want them to put aside for a moment some of the political positioning that they’ve indulged in and I want them to work with us in order to ensure that we save lives and protect the NHS.

But hours later the Prime Minister’s senior adviser Sir Edward Lister held talks with Mr Burnham in which he is said to have made a significant new financial offer.

Whitehall sources said the cash could run into ‘tens of millions’ of pounds to help ensure compliance with the swingeing Tier Three restrictions ministers want to introduce.

The offer is in line with deals struck with Merseyside and Lancashire, which have both been granted an additional £30million in recent days to help support businesses and jobs.

But it falls short of Mr Burnham’s demand for the furlough scheme to be extended in full to provide 80 per cent of the wages of those unable to work.

Its replacement, the Job Support Scheme, will provide only 66 per cent of wages, although ministers insist the low-paid will also get Universal Credit top-ups.

Mr Burnham’s office last night described the talks with Sir Edward as ‘constructive’, with the mayor expected to consult with other local leaders overnight.

Downing Street indicated last week that Greater Manchester would be forced into Tier Three regardless today.

But last night it appeared ministers were ready to take a little longer to try to clinch a deal.

Mr Gove yesterday refused to comment when it was suggested to him that Greater Manchester would be in Tier Three from today.

Ministers fear compliance with new restrictions would be low if Mr Burnham and other local leaders reject the crackdown, although Greater Manchester Police last night confirmed officers would enforce any new regulations, which are likely to include pub closures.

Mr Gove yesterday contrasted Mr Burnham’s hardline stance with that of leaders in Merseyside and Lancashire, who have reluctantly agreed to enter Tier Three.

South Yorkshire is also thought to be close to agreeing on a package of Tier Three restrictions and support.

But attempts to isolate Mr Burnham politically have been undermined by the support of local Conservative MPs, who also oppose further restrictions in the region.

Sir Graham Brady, chairman of the 1922 Committee of backbench Tory MPs, said politicians across Greater Manchester were ‘pretty united’ against the plans.

He told the BBC’s Broadcasting House show that local MPs and council leaders had ‘not been given the evidence it would be effective’.

He added: ‘We can see no reason for taking that significant economic hit especially if it does not come with full compensation for the economic hit when there is no evidence being advanced as to why it might work.’

And he warned the PM not to impose the restrictions, adding: ‘If you have got a situation where the MPs, the council leaders and the mayor are standing up for the people they represent, it would be unwise to impose it over their heads.’

Carl Heneghan, director of the Centre for Evidence-Based Medicine at the University of Oxford, also questioned the value of further measures in Greater Manchester at this stage.

Writing in The Sunday Telegraph, he said average cases in the city had fallen by 20 per cent in the first week of October, suggesting measures might be working already.

‘If policy keeps intervening at the first sight of rising cases then we will never learn if any given intervention has worked,’ he said. ‘The time has come to follow the data, watch the trends and slow down the thinking.’

Mr Burnham acknowledged the region faced a ‘serious situation’, but accused the Prime Minister of having engaged in an ‘exaggeration’ of the severity of Covid-19 in the region, saying intensive care bed occupancy was still well below its April peak.

Meanwhile, the latest daily figures revealed a further 16,982 lab-confirmed cases of coronavirus in the UK. It brings the total number of cases to 722,409.

The Government also said a further 67 people had died within 28 days of testing positive for Covid-19, as of Sunday. This brings the UK total to 43,646.

Labour’s plans for a temporary lockdown could see the economy and society shut down ‘multiple’ times this winter, senior figures admitted yesterday.

But Labour’s Shadow Education Secretary Kate Green yesterday admitted that the lockdown, which would include the closure of shops, pubs and restaurants, might have to last longer than three weeks to be effective.

And the shadow Cabinet Office minister Rachel Reeves said the exercise might have to be repeated several times in the coming months.

Asked whether Labour accepted that the measure might be required ‘multiple’ times through the winter and spring, Miss Reeves told the BBC’s Andrew Marr Show: ‘If that is what is needed then that is the approach that has to be taken, because we’ve got to get a grip on this virus.’

She added: ‘The tiered approach isn’t working. Tier Two is just a holding ground before you go into Tier Three.’

Cabinet Office Minister Michael Gove yesterday said he was ‘concerned’ by the admission from Miss Reeves.

Mr Gove insisted that it made sense to take tough action in the areas of ‘highest incidence’ rather than imposing blanket national restrictions, which he said would damage the economy while providing little health benefit.

A leaked letter from the Welsh Confederation of Passenger Transport suggested it had already been given the green light.

It said the restrictions ‘will take us back to the situation in March’. Primary schools would reopen after half-term but secondaries could remain shut for the lockdown. 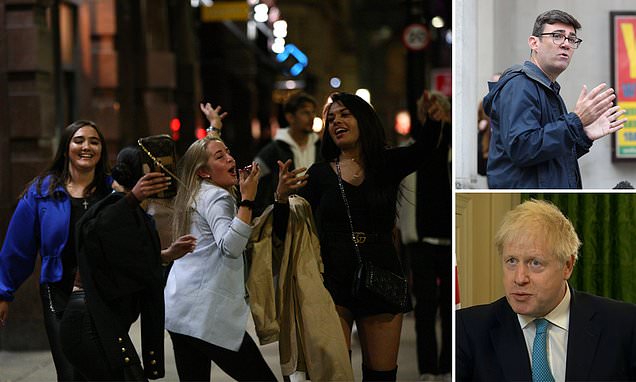