The French President has been insistent throughout trade negotiations that access for his country’s fishermen into British waters should not be compromised as part of any agreement between London and Brussels. The EU figurehead has continued to warn France’s fishermen will not be “sacrificed” as part of the now bitter and long-running Brexit process. On Friday, Boris Johnson piled the pressure on the EU by calling a halt to talks with Brussels on a trade deal, warning Britain to prepare for a final no-deal Brexit.

Fishing has been a major stumbling block in negotiations, with both sides remaining a significant distance apart over their demands for their respective industries after Brexit.

Britain wants fishing quotas to be renegotiated in an annual basis, but the EU has argued this would make it impossible for the industry to make investment decisions.

Mr Macron warned on Thursday “our fishermen will not be the victims of Brexit”, and added: “We didn’t make that choice. The British people did”. He also warned France is ready for a no deal outcome.

But this has sparked a furious reaction from Brexiteer Daniel Kawczynski who warned if the French President continues to “overplay his cards” on fishing, “he will end up with egg on his face”.

The Conservative MP for Shrewsbury and Atcham also warned should that happen, Mr Macron “will have to have a difficult conversation with his fishermen as to why there is no further access to British waters at all”.

Mr Kawczynski told Express.co.uk: “Macron has to please his fishing unions, but we’re not scared of a no deal.

“It would be much more difficult for them because in a no deal scenario, they will lose everything.

“At the moment, French fishing vessels will have licences that are negotiated on an annual basis and the Government is now talking about a three-year transition period to implement some of these changes, which I think is over-generous.

“If Macron overplays his cards, he will end up with egg on his face and will have to have a difficult conversation with his fishermen as to why there is no further access to British waters at all.”

The Brexiteer labelled Mr Macron’s comments “discourteous and disrespectful” and is bemused the French President has not yet understood the UK is now an independent sovereign nation and French fishermen won’t have the same access to British waters after Brexit.

He has also urged the UK Government not to make any further concessions on fishing and to walk away with no-deal if the French are not prepared to compromise.

Mr Kawczynski told this website: “Macron is playing true to form. What he is saying again is highly discourteous and disrespectful.

“He still hasn’t got to grips with the fact that we are now an independent sovereign nation and British waters are not going to be continued to be fished by French fishermen, plundering fishing stocks.

“For example, off the coast of Cornwall, 80 percent of fishing goes to the EU and there is just a tiny fraction left for British fishermen.

“I have been talking to Conservative MPs today in the House of Commons and there is an absolute determination that the Government does not make any further concessions on fishing.

“If France are not prepared to do a deal on this, then we need to walk away without a deal and revert to the Australian WTO model.”

Speaking on the second and final day of the European Council summit in Brussels, Mr Macron admitted French fishermen know they won’t get the same access to British fishing waters after Brexit in what appeared to be the first signs of a softening stance on the thorny issue.

He said: “Will the situation be the same as today’s? No, that’s for sure. Our fishermen know it, we know it too. We’ll have to help them.

When asked why he would block a Brexit deal over sighing, the French President raged the question showed the reporter had been “brainwashed”.

He insisted the main priority for EU leaders was to ensure fair competition rules, warning: “It happens the remaining 27 leaders of the EU, who chose to remain in the EU, are not there simply to make the British Prime Minister happy.”

News – Brexit fishing row: Macron warned HUGE gamble will leave him with ‘egg on his face’ 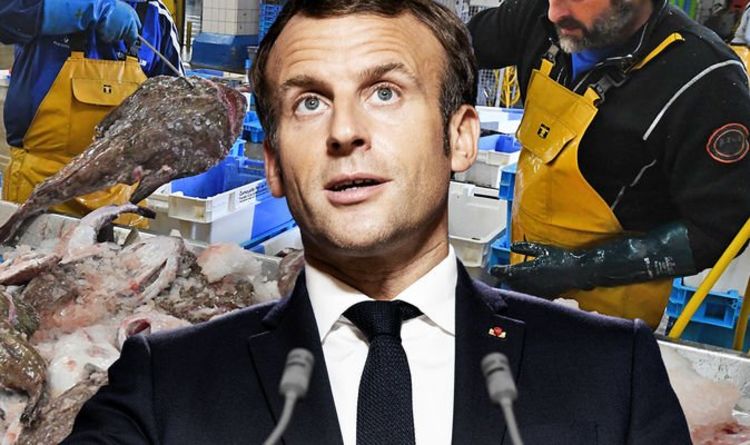