The insider hit out at Brussels after Boris Johnson declared that Britain should prepare for no deal in a statement on Friday. Following the Prime Minister’s announcement, UK chief negotiator Lord Frost told his EU counterpart Michel Barnier not to travel to London next week for further negotiations.

The Government source said: “Instead of engaging in a meaningful negotiation, the EU seemed to think they could run down the clock to force the UK to make concessions.

“If they did think that, they have made a major misjudgement about this Government compared to its predecessors.”

In his statment, Mr Johnson fumed that the EU was not prepared to offer the Canada-style deal the UK has asked for.

He said: “They want the continued ability to control our legislative freedom, our fisheries, in a way that is obviously unacceptable to an independent country.

“Given that this summit appears to explicitly rule out a Canada-style deal, I think that we should ready for January 1 with arrangements that are more like Australia’s.”

The UK left the EU on January 31 and is in a transition period until the end of the year.

Brexiteer Sir John Redwood has ripped into Michel Barnier, telling the EU chief negotiator to stay put in Brussels “unless he understands that we intend to be independent” following Boris Johnson’s defiant warning to Brussels.

Speaking to Martin Daubney and Belinda de Lucy of Brexit Unlocked, the Tory MP issued a scathing assessment of the EU, saying they should “not expect to boss us around anymore”.

Writing in the Sunday Telegraph, Cabinet Office minister Michael Gove said: “It is not my preferred destination, and there will be turbulence en route.

“I am not blithe or blasé about the challenges, but if the choice is between arrangements that tie our hands indefinitely, or where we can shape our own future, then that’s no choice at all.

The National Farmers’ Union (NFU) has called on Parliament to adopt an amendment to the Agriculture Bill which they say will protect UK food standards in future trade deals.

The Government won a vote in the Commons last week to reject the House of Lords amendment to the Bill which would have required agricultural and food imports to meet domestic standards.

NFU president Minette Batters wrote in the Mail on Sunday: “I hope that Parliament will, next week, put the Agriculture Bill to bed, accept Lord Curry’s amendment to strengthen the Trade and Agriculture Commission, provide a legal basis from which to operate and give MPs the role in agreeing our future trade deals.”

The Government has insisted that existing protections are already in place and they have no intention of watering them down.

News – Brexit LIVE: EU shamed for major error after trying to ‘run down the clock’ on Boris 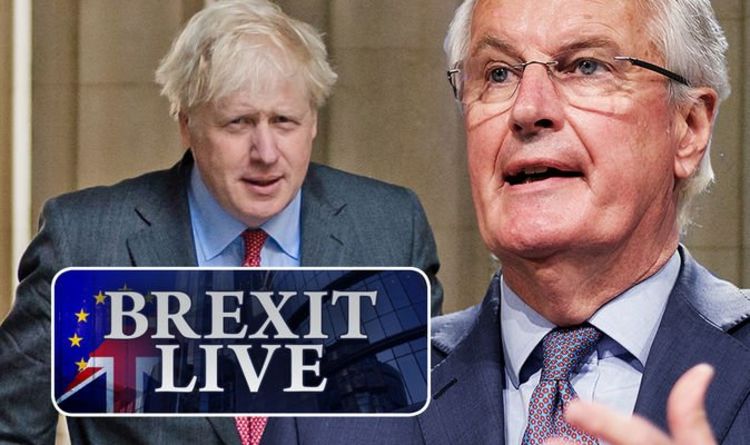