Pep Guardiola refuted the obvious master versus apprentice narrative in the build-up to Manchester City’s clash with Arsenal. The edgy 1-0 win over his former assistant confirmed that Guardiola wasn’t just blowing smoke up Mikel Arteta’s backside – but Pep demonstrated that he can still teach his former sidekick a thing or two.

A potential classic at the Etihad was drowned in the respect these former colleagues still hold for one another. The wariness of both sides, understandable it must be said, turned what could have been a slugfest into a cagey affair settled by one moment of decisiveness on City’s part and a minor lapse in concentration on Arsenal’s.

That will do just fine for Guardiola. City have gone balls out in their last two matches and have suffered embarrassment in both. Leicester picked them off with staggering ease three weeks ago, while Guardiola’s mentor, Marcelo Bielsa, went toe-to-toe with the Spaniard during City’s last Premier League outing before the international break when Leeds were unfortunate not to take all three points in a thriller at Elland Road.

With the roles reversed and Guardiola being pegged as the master to Arteta the apprentice, having doubtless stewed on it for the last fortnight, the City boss opted for a more disciplined approach to avoid being shown up by his former right-hand man.

Guardiola’s intention was to avoid a repeat of what happened at Wembley in the FA Cup semi-final. City never got to grips with Pierre-Emerick Aubameyang coming off the left flank but Pep hatched a plan to avoid history repeating itself. And it worked.

It wasn’t entirely evident in the early stages what that plan was, with all sorts of numbers being thrown around in all manner of sequences to describe what shape City were taking, but the principle of Guardiola’s selection was to close the channel between his right-back and right-sided centre-back, the space where Aubameyang loves to cause havoc.

On this occasion, Joao Cancelo and Kyle Walker squeezed out Aubameyang and the Arsenal captain failed to register a shot of any kind on Ederson’s goal. Walker was especially impressive alongside Ruben Dias making only his second City appearance.

That is not to say the City goalkeeper wasn’t worked. Ederson had to be sharp off his line twice in the first half with one save to deny Bukayo Saka, after Aubameyang teed up the youngster – evidence that the keeper had put his costly mistake at Leeds behind him.

Pep Guardiola reacting to Sol Campbell’s comment on the game being almost ‘chess like’ considering his close relationship with Arteta pic.twitter.com/EQXnoZnUcL

That opportunity, and a penalty shout just before the break when Walker’s boot strayed dangerously close to Gabriel’s face, should have encouraged Arsenal. But the Gunners seemed too preoccupied with the potential ramifications of being drawn out. City resisted the temptation to be too adventurous but that is somewhat understandable given their recent fortunes.

The fact City had won their last seven league meetings with Arsenal, coupled with the Gunners not having have not yet beaten a top-six side since 2015, maybe contributed to the visitors’ wariness but with City creaking in the opening weeks of the season and Arsenal in rather better form, perhaps this was an opportunity missed on Arteta’s part. This was a new Arsenal side haunted by the failings of old ones.

Arsenal had to adapt their plan immediately before kick-off when Rob Holding dropped out after sustaining an injury in the warm-up. David Luiz came in, but fortunately for Arteta, this was the Luiz which shackled City’s attack in the FA Cup semi-final, rather than the one who shambled his way through Arsenal’s trip to the Etihad.

But Arteta steadfastly refused to stray from that plan. Even in the second period, when City smothered the game with possession, Arsenal did not tweak their approach. Arteta’s changes were like for like, even when Alexandre Lacazette replaced Willian with a quarter of the game still remaining. Willian played as a false nine and if anything, Lacazette, a proper nine, played even deeper.

Arsenal’s lack of adventure was gratefully observed by City, who collected their first clean sheet of the Premier League season with an unfamiliar back four. But that rearguard was assembled with one thing in mind – to stop Aubameyang – and Guardiola will take great delight in a job well done. 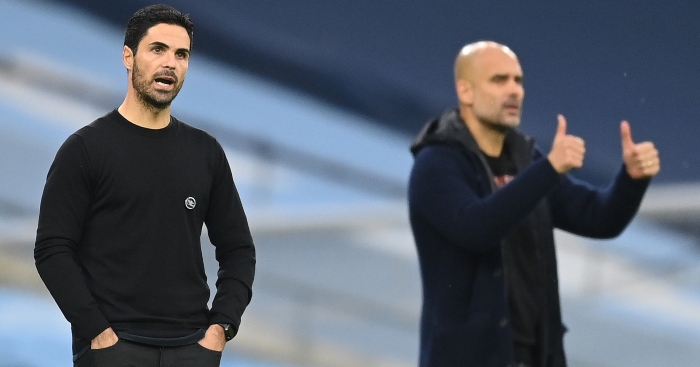