President Trump is being vastly outspent by Joseph R. Biden Jr. in television advertising in the general election battleground states and elsewhere, with the former vice president focusing overwhelmingly on the coronavirus as millions of Americans across the country begin casting early votes.

Mr. Biden has maintained a nearly 2-to-1 advantage on the airwaves for months. His dominance is most pronounced in three critical swing states — Michigan, Pennsylvania and Wisconsin — where he spent about $53 million to Mr. Trump’s $17 million over the past month largely on ads assailing the president’s handling of the virus as well as the economy and taxes, according to data from Advertising Analytics, an ad tracking firm.

In Pennsylvania alone, Mr. Biden ran 38 different ads during a single week this month, a sign of how comprehensive his effort there has been.

The president’s ad strategy, in turn, reflects the challenges facing both his campaign finances and Electoral College map. He has recently scaled back advertising in battleground states like Ohio and Iowa and, until this past week, slashed ads in Michigan and Wisconsin, despite being behind in polls. And Mr. Trump is having to divert resources to hold onto Republican-leaning states like Arizona and Georgia.

Mr. Trump spent less on ads in 2016, too, but he went on to narrowly capture critical states anyway and prevail over Hillary Clinton. Back then he relied heavily on huge rallies and live cable news coverage to get his message out, and he got extensive airtime for his attacks on Mrs. Clinton. This time around, his rallies have been fewer and smaller because of the pandemic and his own virus infection; the events have gotten less cable coverage; and he has had a hard time making attacks stick on Mr. Biden.

In many ways, the advertising picture reveals how the pandemic has upended the 2020 race. With in-person campaigning sharply limited, the traditional advantages built by a ground game in battleground states have largely been replaced by the air cover provided by advertising. More than $1.5 billion has been spent on the presidential race alone; by contrast, $496 million was spent on ads in just the presidential race by this point in the 2016 race.

Onscreen, voters are inundated with imagery of the pandemic — hazmat suits and shuttered businesses — as well as scenes from protests, both peaceful and violent.

Roughly 80 percent of the Trump campaign’s ads have been either negative or what’s called a contrast ad, a mix of criticism of the opponent and self-promotion. Of those, 62 percent were all-out attacks. For Mr. Biden, about 60 percent of campaign ads have been negative or contrast, with just 7 percent outright negative.

This inundation can be dizzying to viewers in swing states. In Phoenix, during the Spanish language broadcast of “Exatlón,” a popular reality TV show, a Biden ad that hails Senator Kamala Harris’s record with the Latino community and that shows her peacefully marching in the streets is followed by a Trump ad decrying Mr. Biden as “radical,” with scenes of violent clashes from protests. “Exatlón” runs an average of 15 ads from the Trump or Biden campaigns per broadcast.

In Philadelphia, fans of “Judge Judy” had to sit through an average of five political ads per half-hour of broadcast, with the Biden and Trump campaigns offering dueling arguments on criminal justice reform.

The increasingly lopsided nature of the TV ad wars is part of an overall narrative that shows a persistent, if slight, advantage for the former vice president. Mr. Biden has built steady, single-digit leads in battleground polls with a campaign message of resolve and a pledge to control the pandemic — points reflected in his ads. Mr. Trump, who has repeatedly shifted his messaging, has played more defense on the airwaves.

The result is a reversal of fortunes in a campaign where it seemed Mr. Trump had built an unstoppable cash machine early on and, in the words of his former campaign manager, had a “death star” of political advertising ready for the final push. Having been outspent by roughly $124 million on the airwaves since May, Mr. Trump has largely ceded the ad wars to Mr. Biden.

“The candidates almost always try to match what their opponent is doing because it’s like an arms race,” said Lynn Vavreck, a politics professor at the University of California, Los Angeles. “They understand that allowing them to get ahead has consequences.”

For months, the Trump campaign held a significant advantage on digital advertising, though recently the Biden campaign has essentially matched the Trump footprint online, reaching a rough parity on Google and Facebook over the past 30 days, at about $50 million on the platforms for each campaign.

Of course, the overall effectiveness of political advertising varies widely from race to race, and is likely to have less impact in winning over voters when an electorate is exceptionally polarized, as it is in 2020. But given the slowdown of normal operations, campaigns have relied on television ads this cycle to simply remain in the daily conversation.

Both campaigns are spending by far the most money and airing the most ads in Florida. It’s a must-win for Mr. Trump; if Mr. Biden prevails there, political strategists believe it would signal a clear path to victory. Mr. Biden has spent about $14 million more on broadcast television and cable ads there than Mr. Trump. The latest polling average calculated by The Times’s Upshot shows Mr. Biden with a four-point advantage.

In Florida, perhaps no markets offer a greater indication of both campaigns’ strategies than Miami-Fort Lauderdale, home to Mr. Biden’s biggest base of support in the state, and the Tampa-St. Petersburg media market, which includes Pinellas County, a populous county that switched from blue to red in 2016.

Tampa is one of the few markets where Mr. Trump has been outspending Mr. Biden over the past 30 days, as his campaign tries to hold onto support with a largely negative campaign focused on Mr. Biden’s tax proposals.

But in Miami, Mr. Biden is the dominant force on the airwaves. Democratic operatives view their path to winning Florida through a massive turnout in Miami, the state’s most diverse city, where Democrats have a huge advantage.

Mr. Biden has been airing two biographical spots — one in Spanish and one in English, each with near-equal money behind them — that focus on his personal history benefiting from health care, and his fights to expand that access through the Affordable Care Act.

“That had extraordinary potency in 2018,” said Roy Temple, a Democratic ad maker, referring to the health care ads and messaging that helped Democrats take back the House two years ago. “If anything, Covid added to the potency of that, because you’ve got literally millions of people who now have a new pre-existing condition.”

But while the Biden campaign is looking to Florida for a knockout punch, it has also steadily been landing body blows in the former “blue wall” states of Pennsylvania, Michigan and Wisconsin that Mr. Trump won in 2016.

Take Milwaukee, where Mr. Biden has been owning the airwaves at a nearly 5-to-1 spending advantage over the past 30 days. While it is the Democratic anchor of the state and where Mr. Biden needs to turn out a large part of his base, the Milwaukee media market includes Kenosha and Racine, two of the 10 biggest counties in the state and ones that Mr. Trump flipped to red in 2016.

Now, voters in the two counties, as well as in Milwaukee, have seen an average of 139 Biden ads each day for the past week, and just 17 Trump ads. The Biden campaign has been running a mix of ads that are heavy on personal biography and that contrast his vision for controlling the pandemic with Mr. Trump’s handling of the virus.

In Detroit and Philadelphia, the ad disparity is similarly stark, with Mr. Biden more than doubling Mr. Trump’s spending in both cities. The Biden campaign has been making an effort to energize Black voters, with ads featuring the actor Samuel L. Jackson and young Black millennials from Flint, Mich., discussing the importance of voting.

But while the traditional swing states occupy most of the attention, Mr. Devine says the Biden campaign’s dominance in Arizona is among the biggest indicators of his campaign’s strength.

“If you can move into the other guy’s terrain and force them either to defend it or actually make a play to take it away from them,” Mr. Devine said, “that’s the single most aggressive play there is in a presidential campaign — to move against an opponent in turf that belongs to them.”

The Biden campaign’s large investment in Arizona has forced the Trump campaign to move some money around as well, adding $5.7 million more to its ad reservations in Arizona since Aug. 30.

Forcing the Trump campaign to spend more in Arizona, a Republican state that hasn’t voted for a Democratic presidential candidate since 1996, is most likely a factor that has forced the campaign to draw down its advertising in states like Ohio and Iowa, two traditional battleground states that the campaign won handily in 2016 and is hoping to do again this year.

But it has also meant that the Trump campaign has significantly reduced spending in Minnesota, a traditionally blue state that Republicans had hoped would be in play in 2020. Mr. Biden has had double-digit leads in most polls there.

The Trump campaign claims that all of its ad decisions have been strategic, and not budget-forced.

“Television ads are a small piece of the voter outreach puzzle and the Trump campaign has perfected the art of utilizing them in the most strategic, surgical way possible,” said Samantha Zager, the deputy press secretary for the Trump campaign. “It makes no sense to run TV ads in states we know we’re going to win, and in other states, they’re a useful tool to reach the right voters with the right message.”

The Trump campaign has been using a more counterintuitive way to try to maximize its ad spends in particularly expensive states like North Carolina, Arizona and Michigan, with a national buy — purchasing an ad on a national network that airs in every state. While competitive Senate races help drive up the cost per ad in a local market, in some states a national buy ends up being cheaper.

The Trump campaign is also spending directly on local cable networks that have high viewership among more rural voters, such as RFD-TV, WGN-TV and the Weather Channel, and spending heavily on evangelical and conservative radio stations.

Perhaps to allay concerns about the advertising spending gap, Bill Stepien, the Trump campaign manager, released a memo in September saying that the media coverage of the president’s travel and campaigning was equal to $40.1 million of broadcast air time.

For the Biden campaign, having an enormous ad campaign running across many states reflects the many paths it sees to the White House.

“We started in a broader swath of states, including two that Democrats have not won in recent cycles, because we see a lot of paths to 270,” said Patrick Bonsignore, the director of paid media for the Biden campaign. “We’ve gone into new states because our paths to 270 are increasing.”

But as the end of the race draws near and more people begin to vote, some political experts say the president is running out of time to make up his messaging gap.

“The best mobilizer is message,” said Ken Goldstein, a professor of politics at the University of San Francisco. “Advertising can’t matter when everyone has made up their mind. And some people have not only made up their mind but cast their vote.”

News – Flush With Cash, Biden Eclipses Trump in War for the Airwaves 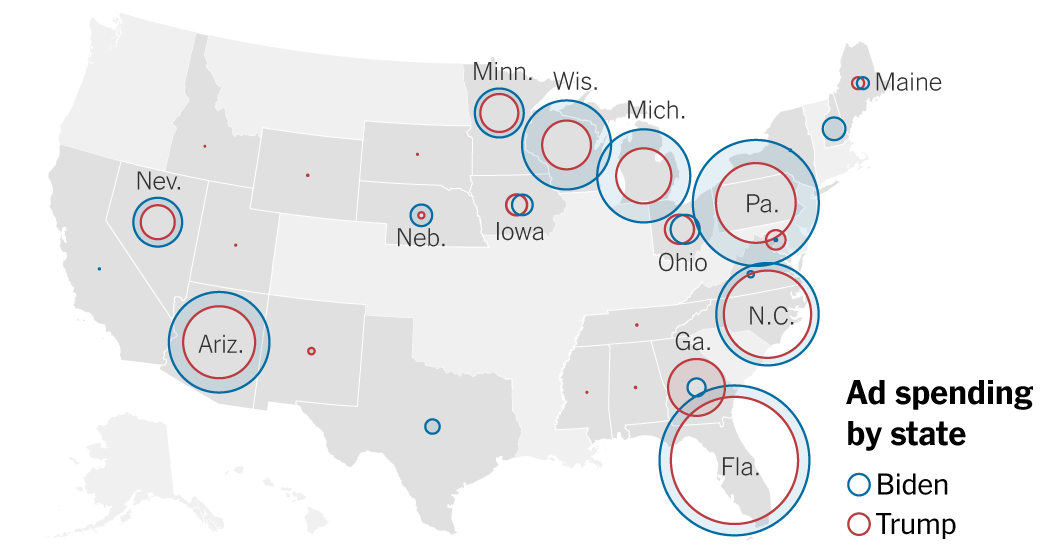