Outside Samuel Paty’s school, groups have held “Je Suis Enseignant” (I am a teacher) placards and defended freedom of speech.

Conflans-Saint-Honorine is a place like many others. In the outer suburbs of Paris, it is a pleasant but unremarkable grid of homes and amenities.

And yet now, it finds itself at the very heart of the French national debate after a truly horrific murder on its streets.

Within hours, President Emmanuel Macron was on the scene, visiting the school where Mr Paty taught history and geography.

Macron normally likes to deliver long, impassioned speeches, but here his address was briefer and more restrained. He looked stunned but called for unity, while describing the murder as an act of “Islamist terror”. The education minister, Jean-Michael Blanquer, described the killing as an attack on the French Republic.

At the school where Mr Paty taught, there was a long line of teachers, parents and students on Saturday, coming to pay respects, laying flowers and leaving notes. The school, which was ringed by a line of French CRS riot police, also provided psychological support for those affected by what had happened.

Some carried signs saying “Je Suis Enseignant” (I am a teacher) in tribute to Mr Paty. Online, the similar expression “Je Suis Prof” was being widely shared.

The impact of this upon the school community will be great. But it is also affecting France, a country that has struggled enormously to cope with the effects of Islamist terrorism in recent years.

It is five years since gunmen broke into the offices of the satirical magazine Charlie Hebdo and killed 12 people. More died in the following days, the precursor to a wave of terrorist attacks across France that killed hundreds.

In Paris, the trial is now under way of men and women accused of being accomplices in those first attacks. As the trial started, Charlie Hebdo republished cartoons of the Prophet Muhammad as an exercise in free speech.

Others called it inflammatory, even reckless. Not long after, the magazine’s existing head of human resources was moved out of her home on police advice.

Last month, a man attacked two people outside the former offices of Charlie Hebdo; both suffered serious but not life-threatening injuries. And all the while, the trial continues.

Now, this murder will heighten again the question of Islamist terrorism, and its causes. It seems quite clear that there is a link between the killing of the teacher, and Mr Paty’s decision to launch a classroom discussion over the cartoons of the Prophet Muhammad.

So what to do? In a country that puts such a value on free speech and secular government, the right to insult is entrenched. But the fury sparked by these cartoons has now cost many lives, and heightened tensions dangerously.

Into this quandary walked the local mayor, Laurent Brosse. He was born and bred in this town.

“I want to tell the locals that we will recover,” he said. “We will all rise together. We will rise again thanks to our spirit of solidarity which makes the uniqueness of Conflans-Sainte-Honorine.

“It is by debating, exchanging opinions and listening that we will be able to overcome this dramatic test.”

But there has been a lot of talking in France over recent years in search of an answer, to work out how to preserve the fundamental tenets of French society while also stemming the rise of Islamist terrorism. 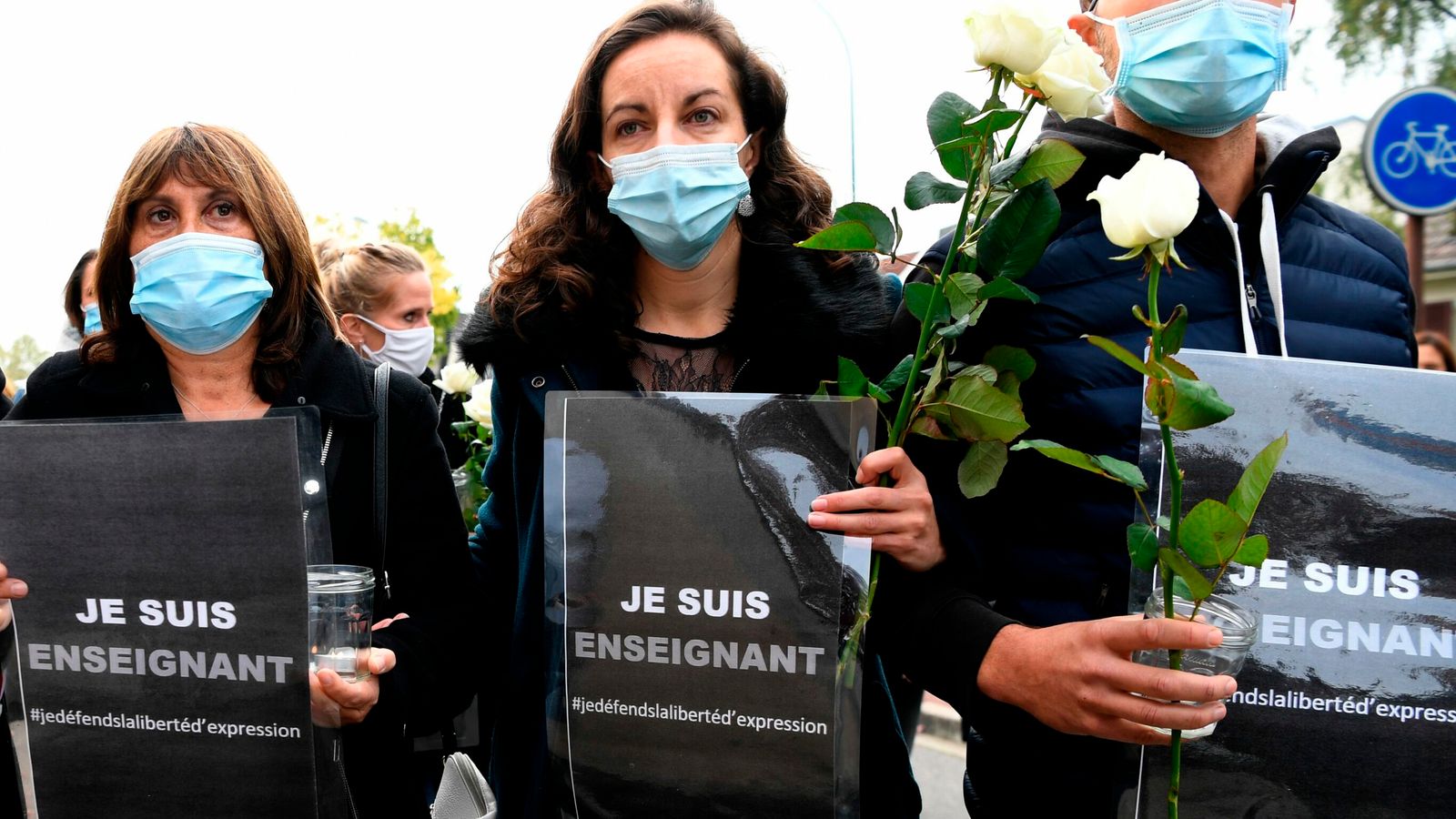