An 18-year-old man has died in hospital after a horror car crash which killed three people left him fighting for his life.

Nathan Cartwright, 18, was in the front seat of a yellow Skoda Fabia which ploughed into a tree in Kingswinford, near Dudley, on Tuesday night.

West Midlands Ambulance Service rushed him to the Queen Elizabeth Hospital’s Major Trauma Centre with life-threatening injuries but he tragically lost his fight for life on Saturday.

Mr Cartwright is the fourth person to die in the crash after driver Joshua Parkes, 21, Lucy Tibbetts, 16, and another 16-year-old girl – whose family do not wish her name to be released – were pronounced dead at the scene.

A fifth passenger, Isobel Ramsell, also 16, is in a critical condition in hospital with potential life-threatening injuries.

Nathan Cartwright, 18, has died in hospital after a horror car crash which killed three people left him fighting for his life

He is the fourth person to die in the crash after driver Joshua Parkes, 21, (left) Lucy Tibbetts, 16, (right) and another 16-year-old girl – whose family do not wish her name to be released – were pronounced dead at the scene

A police car was nearby when the crash happened but West Midlands Police has so far been unable to clarify whether it had been chasing the Fabia.

An air ambulance, a critical care cars, three paramedic officers, an emergency doctor and six ambulances were sent to the scene after the yellow Skoda Fabia crashed on Bromley Lane at around 8.50pm.

A West Midlands Police vehicle spotted the car shortly before the crash, but said it is not clear whether a pursuit took place.

A fifth passenger, Isobel Ramsell, also 16, is in a critical condition in hospital with potential life-threatening injuries

The deceased were among five people travelling in a yellow Skoda Fabia which crashed on Bromley Lane in the Kingswinford area of Dudley at around 8.50pm on Tuesday

Paying tribute to Miss Tibbetts earlier this week, her mother said: ‘Our beautiful baby has been taken from us.

‘You were an inspiration Lulu, you made us smile when you yourself found it so hard to… not just a daughter, a true friend.

Miss Tibbetts had recently posted on social media her delight in passing her GCSE exams writing: ‘Most nervous day of my life, but we smashed it and I couldn’t be more proud of my best friend. Onwards and upwards.’

Friends told on Wednesday how Mr Parkes had left the road while overtaking another car before ploughing into the tree ‘at 90mph’.

Neighbours described how they ran out of their homes to perform CPR on the girls after they were flung from the wreckage.

One friend, who was laying flowers at the scene, said last week: ‘I know Lucy who died and Nathan who was in the passenger seat.

‘Nathan is hospital in Birmingham with a bleed on his brain. He’s having surgery because he’s also got a damaged spine.

A police car is seen being towed away from the scene of the crash last night. West Midlands Police said ‘ it is not known if there was any interaction with the Skoda’ by police

‘He overtook it and as he swerved back into the lane he lost control and went into the tree.

‘She had started a new job and was sorting her life out, but now she’s lost it.

‘She struggled with anxiety and other girls would give her a hard time because they were jealous of how pretty she was.’

One resident, who did not wish to be named, said: ‘I was in the utility room and the back of my house and even then it sounded like a bomb going off.

‘There was this almighty bang like thunder and we ran out and spotted this car completely mangled.

‘There was hardly any of it left – it still sends a shiver down my spine thinking about it.

‘I just knew people would have lost their lives by the state of the wreckage. The girls were thrown into the road. It was just horrible.’.’

Another resident of the suburban road said they heard the crash and looked out their window to see the yellow Skoda ‘wrapped’ around the tree.

The force initially said officers had seen the vehicle moments before the crash but did not speak with the occupants or pursue the car.

A later statement instead suggests that ‘it is not known if there was any interaction with the Skoda’ by police, and this will now be investigated by the Independent Office for Police Conduct (IOPC).

Emergency services rushed to the scene where three of the car’s occupants were pronounced dead. A teenage boy and a teenage girl also in the car are in a critical condition in hospital

Mr Parkes, the driver, had offered his Skoda for sale or for car swap last Friday, it later emerged.

On his Facebook account, he had posted a photograph of the vehicle with the message: ‘Any swaps/cash offers? Message for details’.

In reply to a friend on why he was selling the car so soon he replied with a ‘police car’ emoji.

The friend also asked him if it was him who he was trying to follow recently until he ran a red light. Mr Parkes replied: ‘Probably.’

A West Midlands Ambulance Service spokeswoman said: ‘Crews arrived at the scene to find a car had hit a tree, with five patients involved.

‘Sadly, it soon became clear nothing could be done to save the driver of the car, a man, and he was pronounced dead at the scene.

‘Despite best efforts of staff, two teenage girls who were back seat passengers in the vehicle were also confirmed deceased at the scene.

Floral tributes have today been left at the scene of the crash where investigators worked through the night to clear the road and collect evidence.

Sgt Dean Caswell said: ‘I’d urge anyone who saw the Skoda driving in the area last night, or who may have captured anything on dash-cam footage, to get in touch with us as soon as possible’

A Go Fund Me page has been set up by Miss Tibbetts’s sister Kaya and has so far raised more than £4,900 for her funeral arrangements and a memorial bench.

A fundraiser has also been set up to raise money for the funeral arrangements for Josh – with a target of raising £3,000.

PC Chris Ridge, from the force’s collision investigation unit, previously said: ‘This is a devastating time for the families of those involved, and we have specially trained officers who are supporting them through this difficult time.

‘The loss of these young lives is shocking and deeply upsetting for all involved. All families wish to have their privacy respected at this difficult time.

‘We’re still working through a number of lines of investigation as we try to understand what happened and why.

‘Anyone who saw the Skoda driving in the area last night, or who may have captured anything on dash-cam footage, is urged to get in touch with us as soon as possible.’ 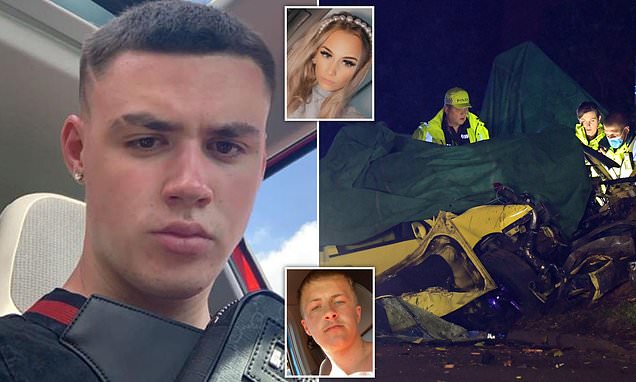