“The No. 1 thing that every American who wants to rescue democracy in the country can do is to sign up for phone bank shifts with the Democratic Party in Wisconsin.”

Feeling anxious about Nov. 3? There’s a lot to worry about. We’re holding an election during a pandemic. Republicans are discussing aggressive tactics aimed, some charge, at suppressing the Democratic vote. And President Trump, who has sown doubts about mail-in voting, has repeatedly refused to commit to a peaceful transition of power should he lose. Democrats hope for an overwhelming “blue wave” to forestall such shenanigans.

How can you help ensure this outcome? Giving money is fine, but you can also donate your energy. Volunteer. Here’s a list of some ways to help.

This is, in many ways, the easiest way to participate. Once you sign up, the campaign will direct you to where it thinks it thinks you’ll be most effective, which may include battleground states. You can also specify areas you’d like to focus on. Creatives can sign up to create graphics, memes and other content. Spanish-speakers can sign up to call or text voters.

And anyone can download the Vote Joe App. One of the most effective ways to increase voter turnout, experts told me repeatedly, is to ensure that your friends and family know how to vote. Once downloaded, the app finds those in your contact list who live in a battleground state, so that you can reach out to them.

Poll workers are especially in demand this year because of the pandemic. The people who often staff polling sites — older, retired people — are more likely to stay home. If poll sites don’t have enough workers, they can’t open, making it harder for people to vote.

Poll work is nonpartisan (and often paid). The nonprofit group Work Elections can help you find your local election office, where you can sign up. Or you can sign up through Power The Polls, which aims to recruit poll workers around the country.

Alternatively, you can volunteer as a partisan poll observer. These observers are trained to spot and report problems for their respective parties. Many states allow only one per party per polling site or precinct. You can sign up through your state’s chapter of the Democratic Party or through the Biden campaign.

Fair Fight, a group founded by Stacey Abrams, the former candidate for governor of Georgia, is also recruiting election observers, with a focus on battleground states.

You can even protect the integrity of the vote from home by volunteering with the nonpartisan group Election Protection, which, among other endeavors, monitors and flags social media for disinformation. Those with legal experience can staff its hotline, 866-OUR-VOTE.

The Last Weekends, run by Swing Left, has a site where, using your ZIP code, you can locate nearby efforts to “virtually connect with voters in key states in order to swing the Senate, beat Trump, and turn state legislatures blue.” (Indivisible, another progressive group, also allows you to find events by ZIP code.)

Or you can write a letter to a voter through The Big Send, which aims to send at least 15 million letters in 2020. It’s a nice option for people who don’t feel comfortable cold-calling or texting voters. The group organizing the effort, Vote Forward, claims that letters sent to voters increased turnout in the 2017 Alabama special election for the U.S. Senate and the Ohio “OH-12” special election.

You can volunteer directly for the Wisconsin Democratic Party. In 2016, Wisconsin went to President Trump by less than 1 percentage point. It’s now experiencing the worst coronavirus outbreak of all the battleground states. It’s looking for volunteers for two important activities: “vote chasing,” which involves calling would-be voters who’ve requested absentee ballots to ensure they know how to fill them out properly; and “vote curing,” which involves calling people whose ballots have been rejected for technicalities and helping them remedy the problem.

You can do something similar for the Democratic Party in North Carolina, a state with a troubling history of restrictions on voting. The party there is also conducting vote-chasing calls. Again, this is not necessarily about cold-calling to persuade undecided voters, which can seem intimidating, but about ensuring votes are properly cast and counted.

Texas could also use your help. Its Republican governor has announced that each county can have only one drop box for ballots — a decision that critics say will make it disproportionately hard for older people and members of minorities to vote. For perspective, Harris County, which contains Houston and nearly five million people, is bigger than Rhode Island.

The Texas Organizing Project mobilizes Black and Latino voters in and around Houston, San Antonio and Dallas, who have historically been underrepresented among voters in the state. Texans can begin canvassing with the group this weekend. (It also has remote volunteering possibilities, which may include calling or texting potential voters and amplifying social media content.)

MOVE Texas focuses on the youth vote. It plans to call between 300,000 and 400,000 newly registered young people, many of them first-time voters, to make sure they know what to do. The organization says it’s nonpartisan. Yet increased turnout among young people is partly what has made Texas competitive for Democrats, said Charlie Bonner, the group’s spokesman.

And the Texas Civil Rights Project needs volunteers for its voter protection efforts, which include poll monitoring and staffing a hotline.

Finally, you could look to Pennsylvania, a battleground state with 20 Electoral College votes. It went to President Trump by fewer than 45,000 votes in 2016 and is seen by many as critical for a 2020 victory.

Pennsylvania Stands Up engages in “deep canvassing,” which involves starting with personal stories and having extended conversations with voters. It claims the technique is much more effective than what it calls “the average Presidential persuasion program.”

Turn PA Blue is seeking volunteers to canvass, call and text potential voters, write postcards and more to deliver the state to Biden and to establish a Democratic majority in the State Legislature. Control of state legislatures can be crucial in a contested election, where the bodies may theoretically have a say in how to apportion Electoral College votes.

There are obviously many more battleground states. A good way to locate efforts by state — or by other preference — is to use the site mobilize.us, a virtual bulletin board of left-leaning activities from the hyperlocal to the national.

Mr. Biden appears to be leading in nearly all of the polls, but that doesn’t mean his supporters should be complacent. Remember that Hillary Clinton got nearly three million more votes than Mr. Trump in 2016, but still lost. To decisively win, Democrats need high turnout, particularly in battleground states.

What about the sore-loser scenario, in which Mr. Biden wins but President Trump refuses to accept the outcome? You can prepare for peaceful mass mobilization through Protect the Results, organized by the progressive organizations Stand Up America and Indivisible. It’s one way to stay apprised of plans.

Sean Eldridge, the founder and president of Stand Up America, told me: “This is an unusual election. It’s not an Election Day. It’s an election season.” What he meant is that voting is just one step of several that you can take over the coming weeks to support our democracy.

So harness that election season anxiety and put it to good use helping your fellow Americans vote. You may find that taking action restores your hope in this divided country. If nothing else, it may be good for your mental health.

Moises Velasquez-Manoff, the author of “An Epidemic of Absence: A New Way of Understanding Allergies and Autoimmune Diseases,” is a contributing opinion writer.

News – Opinion | 5 Ways to Focus Your Angst and Energy Before Nov. 3 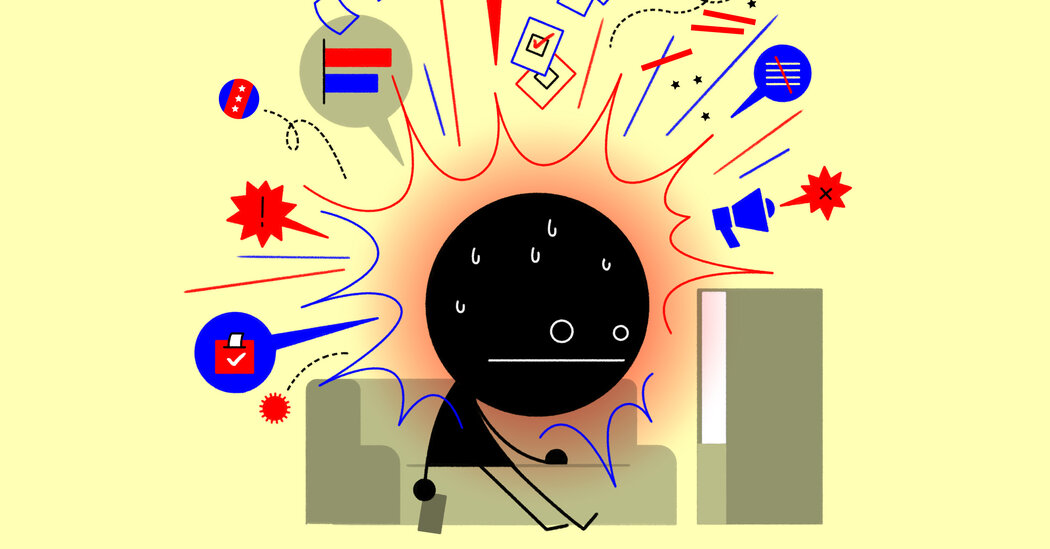