Michigan Gov. Gretchen Whitmer has called on President Donald Trump to stop “inspiring and incentivizing and inciting” domestic terrorism against her, in a plea that came just 10 days after the FBI revealed a right-wing plot to abduct her.

Her statement, made Sunday on NBC’s Meet the Press, comes after Trump told supporters at a Saturday rally in Muskegon, Michigan, to “be careful of” the governor and their state’s attorney general, and after he criticized Whitmer’s attempts to stem the rising number of Covid-19 cases in Michigan. Each time the president attacked the governor, his supporters took up a “lock her up” chant.

For the second time in a single speech, Trump fans in Michigan direct “lock her up!” chants toward Gretchen Whitmer, who just weeks ago was the target of a kidnapping/assassination plot hatched by Trump supporters pic.twitter.com/wh7ts1Cqf5

It’s not a new theme for Trump: He’s long made a point of going after Whitmer, both before and after the FBI arrested six men for planning to kidnap and potentially murder her.

In March, he told Vice President Mike Pence, head of the White House coronavirus task force, not to call “the woman in Michigan” because Whitmer criticized his response to the pandemic.

Immediately after the kidnapping plot was revealed in early October, Trump sent three tweets about Whitmer, briefly noting that he condemns “ANY extreme violence,” while also accusing her of doing “a terrible job” as governor and criticizing her for not thanking him personally for the FBI’s role in stopping a domestic terrorism scheme.

Governor Whitmer of Michigan has done a terrible job. She locked down her state for everyone, except her husband’s boating activities. The Federal Government provided tremendous help to the Great People of Michigan. My Justice Department and Federal Law Enforcement announced…

…today that they foiled a dangerous plot against the Governor of Michigan. Rather than say thank you, she calls me a White Supremacist—while Biden and Democrats refuse to condemn Antifa, Anarchists, Looters and Mobs that burn down Democrat run cities…

…I do not tolerate ANY extreme violence. Defending ALL Americans, even those who oppose and attack me, is what I will always do as your President! Governor Whitmer—open up your state, open up your schools, and open up your churches!

Trump has also attacked Whitmer using nearly the same rhetoric as the members of the far-right militia — who called themselves the Wolverine Watchmen — who were arrested.

“[Whitmer] wants to be a dictator in Michigan,” Trump told a Fox Business host Friday, “and they can’t stand her.”

According to an affidavit by FBI agent Richard Trask, the Michigan conspirators repeatedly referred to Whitmer as a “tyrant” and said she had “no checks and balances at all.”

Whitmer isn’t the only elected official who has become the target of would-be right-wing violence over Covid-19 restrictions — which are well-supported by science. In Wichita, Kansas, on Friday, a man was arrested for plotting to kidnap and kill Wichita Mayor Brandon Whipple because of a mask mandate, according to a report by the Wichita Eagle.

Northam and Whitmer both run states Trump tweeted his supporters should “LIBERATE” — along with Minnesota — in April.

And as as Vox’s Fabiola Cineas has documented, Trump’s rhetoric against Whitmer — and his “LIBERATE” tweets — are not one-off events. He has a long history of “encouraging hate groups and political violence.”

Trump, needless to say, isn’t selective about who he attacks. At the slightest criticism, he’s just as likely to turn his fire on a member of his own party — like Nebraska Sen. Ben Sasse — as he is to go after anyone else.

And Whitmer has criticized him: In March, she said that “we, as a nation, were not as prepared as we should have been” for the coronavirus pandemic, and Sunday on Meet the Press, said the “Trump virus response is the worst in the globe.”

But while Whitmer isn’t alone in pointing out the shortcomings of the federal Covid-19 response — even Gov. Larry Hogan, the Republican leader of Maryland, has also done so, for instance — she has become the unique target of a sustained campaign of vitriol by the president.

Whitmer isn’t just a Democrat or a governor telling people what to do — she’s also a woman telling people what to do. That’s never been particularly popular with a certain subset of Americans, and it’s especially unpopular now that Trump and others have introduced a gendered element into the politics of Covid-19 response, peddling the idea that it’s manly to ignore the risk of the virus.

Indeed, it’s no accident that Whitmer is being called a tyrant and a bitch. The attacks on her feed into age-old stereotypes about women in power — stereotypes that are especially dangerous now as they undermine some of the very leaders who are trying to stop the spread of Covid-19 and keep Americans safe.

Ultimately, Trump’s attacks on Whitmer are just part of a history of misogyny on the part of the president. In 2016, Hillary Clinton was also the target of “lock her up” chants. Just this month, Trump attacked Democratic vice presidential nominee Kamala Harris as a “monster.” And while Senate Minority Leader Chuck Schumer is characterized as “cryin’” in Trump’s tweets, House Speaker Nancy Pelosi is almost invariably labeled “Crazy Nancy” when Trump tweets about her.

According to Barbara Res, a former Trump Organization executive who oversaw the construction of Trump Tower, Trump’s sexism is by no means new. But, she reportedly writes in an upcoming book, “his regard for himself had increased exponentially” over time, “as had his contempt for women.” And Trump’s treatment of Whitmer would appear to be a clear example of that.

Millions turn to Vox each month to understand what’s happening in the news, from the coronavirus crisis to a racial reckoning to what is, quite possibly, the most consequential presidential election of our lifetimes. Our mission has never been more vital than it is in this moment: to empower you through understanding. But our distinctive brand of explanatory journalism takes resources. Even when the economy and the news advertising market recovers, your support will be a critical part of sustaining our resource-intensive work. If you have already contributed, thank you. If you haven’t, please consider helping everyone make sense of an increasingly chaotic world: Contribute today from as little as $3.

News – The return of “lock her up”: Trump won’t stop attacking Gretchen Whitmer 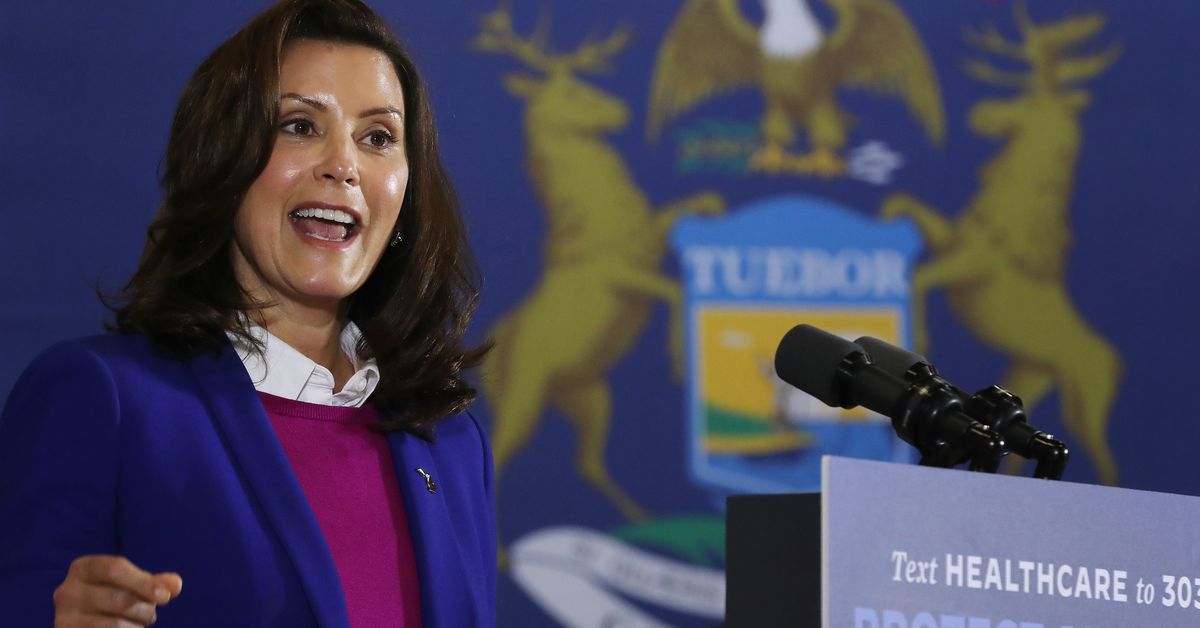