Traffic is still flowing freely across the border from England to Wales on the first day of the supposed travel ban from high-Covid areas.

The ban, which came into force at 6pm on Friday, makes it an offence to travel to Wales from coronavirus hotspots in the UK.

It was described as ‘unenforceable’ by the Police Federation earlier this week and there is still no sign of any high-visibility patrols or roadblocks to deter travel from Merseyside – despite Liverpool being in Tier 3.

Those who ignore the restrictions will be breaking the law and could face fixed penalty notices starting at £50 – but there have so far been no reports of drivers being stopped.

It comes after the First Minister of Wales Mark Drakeford, who ordered the ban, insisted the biggest threat to the UK came from ‘so-called unionist’ at a Welsh Labour Party event attended by former Prime Minister Gordon Brown.

In the angry tirade, he accused Boris Johnson of being ‘neglectful’ and said he ‘will not put in the tie, the effort and the hard work’ needed to keep the UK as one country.

The ban, which came into force at 6pm on Friday, makes it an offence to travel to Wales from coronavirus hotspots in the UK. Pictured: English Welsh border on the A483 between Chester and Wrexham

One notice that read ‘Welsh Covid Rules Apply’ had been erected by the road side in Libanus, Powys

The Welsh Government yesterday issued a tweet which read: ‘From 6pm today, if you live in an area of the UK with high levels of coronavirus, you won’t be able to travel to Wales without a reasonable excuse.

‘This includes tier 2 and 3 areas in England, the central belt of Scotland, and all of Northern Ireland. Help us to #KeepWalesSafe.’

As the restrictions came into force, police in Wales issued a warning insisting they would ‘robustly’ enforce the travel ban imposed by the Welsh Labour Government.

On behalf of the four Welsh police forces, temporary assistant chief constable Nigel Harrison of North Wales police said : ‘As we move into a critical stage of the virus progression, policing across Wales will continue to support the Welsh Government to help limit the spread of the virus.’

He added: ‘We are now at a time where we will robustly enforce the regulations where there are blatant breaches.

‘We will not allow the selfish minority to risk the health of the vast majority who have sacrificed so much over the last few months.

‘We intend to focus our activity on areas and behaviours that pose the greatest risk to our communities.

One large sign that read ‘please stay home, save lives and businesses’ was positioned by the roadside outside a pub in Flint in north Wales

‘We will be proactive in targeting those that are not sticking to the gathering rules, whether that be indoors or outdoors.

After his ban was imposed, Mr Drakeford warned today that Westminster has become a source of ‘huge frustration’ to them because ‘we are a Government that believes in the UK and wants the UK to succeed’.

‘At the same time, we think Wales benefits from the great insurance policy that is the UK.’

Mr Drakeford said the Joint Ministerial Committee consisting of the Prime Minister, and first ministers of Scotland, Wales and Northern Ireland, had not met once under Boris Johnson’s leadership.

‘The way the UK has operated during the crisis has been a wing and a prayer,’ he said. ‘The Prime Minister calls us together randomly, at short notice with very little preparation and then nothing happens for week after week after week.

‘I have called for all the way through a regular, reliable rhythm of meetings between the four component parts of the UK. The underpinning of the UK has been so neglected by this Government.’

The Police Federation of England and Wales said ‘policing in Wales is already over-stretched due to the pandemic’ and the new measures would add ‘yet another level of complexity to policing’.

Mark Bleasdale, Police Federation of England and Wales’ Welsh Lead, said: ‘On the face of it, this is unenforceable because of the difficulty of identifying where people are coming from and where they are going to.

‘There will also be plenty of individuals travelling legitimately from areas which are not high risk, and this will only add to the other difficulties officers face when policing the existing regulations.’

Traffic freely crossed the Bigsweir Bridge, over the River Wye, dividing England (on the right) from Wales (on the left) near the town of Llandogo in south Wales

It confirmed that people from areas with high levels of coronavirus will still be allowed to enter Wales for work, education and medical care.

Obtaining or depositing money with a business, accessing care for children or vulnerable adults, carrying out voluntary or charity work, and training as an elite athlete will also allow a person to cross into the country. 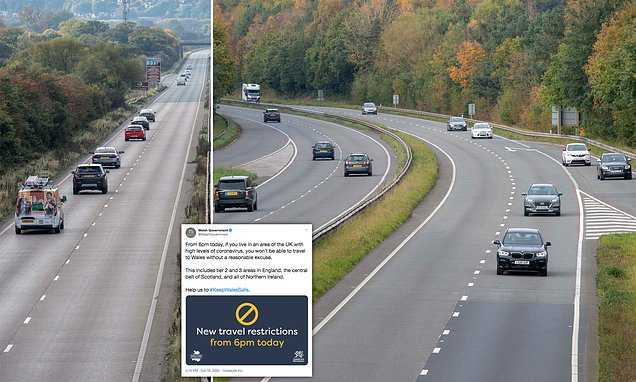